I'm pretty sure #SCOTUS found marking cars like this to be illegal?

Unpopular Opinion 🚨: @JoeBiden needs to atone for his role in oppression of Black America & I’m not talking about a revisionist historical apology. Need something tangible Joe that we can feel 💰 or freedom; #SCOTUS seat ain’t enough my man.

@jemelehill Utterly disappointing @jemelehill given the city in which he plays and the inaccurate equivocation of the military with protesting oppression, injustice and abuse by police. @drewbrees also confuses needs to read the #SCOTUS position on protecting police of systemic policy.

Justice #Thomas is famously, vociferously pro #GunRights—just read his #SCotUS opinions; there are but a handful of them. But I’ve never read one opinion of his where he stood up for #CivilRights.

The dream - @BarackObama on the Supreme Court. #SCOTUS

Least in the Kingdom

This is already too long. Cops are the tip of the spear and the entire system is designed to back them up. Judges specifically worry about restricting cops from doing their jobs and the 4th amendment for instance now has over 120 invisible exceptions documented by the #SCOTUS.

@Raiklin @myjourneymyself It shouldnt matter if you're an R or a D
1 day the party n power may do this 2their opposition, dangerous precedent if it goes unpunished. (Ask #SCOTUS Roberts abt precedence since he likes 2 set it agst #Constitution
@SenJohnKennedy is always spot on!
#KAG #KAG2020 #GodWins

@harryishishabit @OvTheAwakening @Chesschick01 The problem is they are fighting a phantom called racism, real as it may be. Ending racism isn’t going to make the needed changes. They need to be fighting police brutality generally. #SCOTUS qualified immunity rulings, police unions, training, tactics, etc.

@CarmineSabia That would be because MURDER is ALREADY a CRIME.

But hey! be more specific.

I'd be all for an "anti-lynching bill" which makes the type of lynching both #SCOTUS Justices #ClarenceThomas and #BretKavanaugh suffered through a crime!

@josh_lizik @WilliamScott904 @Kempsportsphoto @KalchikValeriy @GreggyNY @IamJohnBurnett @DLoesch #SCOTUS did revisit the #2A in the Heller v DC (2008) case, and they ruled that "longstanding prohibitions" are allowed and they gave examples... Not any prohibition that you can dream up. This ruling goes hand in hand with "in common use" from Miller v US (1939).

@pairakeate @lindasc48 except his name isn't even Brent, you dumb potato. you have no idea who is on the #SCOTUS. best sit this one out.

In the face of all the protests and riots with literally thousands and thousands of people not “social distancing”, #JohnRoberts and #SCOTUS are absolutely on the wrong side of this case and look #Stupid and #Partisan 🤨They are literally discriminating against people of faith 😡

@obelus73740039 @GarrettHaake @MSNBC Whats happening in the streets of our Nations Capital right now leaves me w/no other thought than our Constitution is worthless.@POTUS is using military against US citz. #Congress isn’t stopping it; #SCOTUS is powerless. @MarkWarner @timkaine @RepDonBeyer why are you doing nothing?

@KristenClarkeJD So Rand Paul, a single Senator, can hold up a bill that has nearly unanimous support, but the Sen leader can get away with putting partisan hacks in judicial positions, including #SCOTUS, with a single vote majority.
#BunkerBoy broke the country, #MoscowMitch broke the Senate.

Least in the Kingdom

@dcexaminer @Eric_Schmitt There must be a legal mechanism to remove an official who abuses the power of the #StLouis District Attorney’s office so egregiously.

@TheJusticeDept & the #SCOTUS will ultimately have to do something about this judicial activism plaguing America’s judiciary system. ⚖️?

Where's @GOP leadership? Why have they turned a blind eye to what we all witness? Where is #SCOTUS? If there's ever been a time to rid this country of a dangerous threat, this is it! INVOKE THE 25TH! Trump can't come back from this! #InvokeThe25thAmendmentNow #TrumpResignNow

@jaketapper Why is #SCOTUS so unequal and partisan? The entire justice system is a deplorable mess because the lawmakers are. Our freedoms are being regulated away while the rich laugh. From labor laws to voting laws that disenfranchise we the #HumanCapitalStock #kleptocracy #SaveAmerica

They're having a morale collapse. We saw the same thing from the 6th Fleet today. IMO fear of mutiny. Putin's puppet paid off big time. #SCOTUS hides a Russian traitor in the @Whitehouse. Good time for Russia to launch. We've been well played. Perhaps DPRK launches the SS-18s.

@LiberalLaw2020 This upcoming #SCOTUS decision about immunity is critical.

#RaceBaiterinChief, #Obama has spoken out. He’s trying to keep in the limelight so he can be nominated for a role of #Justice in the #SupremeCourt. #SCOTUS. #POTUS44 #WorstPresident ever. #MostcorruptPresident. Stop the academic rhetoric #BO! Did #nothing

This is important. This is extraordinary.

Far too late: He didn't speak when it mattered

#SCOTUS, here is the result of your mis-read of 2A - heavily armed idiots riding around threatening a civil war and the only thing authorities do is kill unarmed minorities.

injustice all around, WTF!

@josh_lizik @Patrick66704321 @WilliamScott904 @redgottie @TheGodofSavage2 @GreggyNY @IamJohnBurnett @DLoesch #SCOTUS precedents is clear that arms that have a legitimate purpose within the #2A and are "in common use" that US citizens commonly own have 2A protection.

The Heller Conjunctive Test does the same thing if you would read some 2A cases. 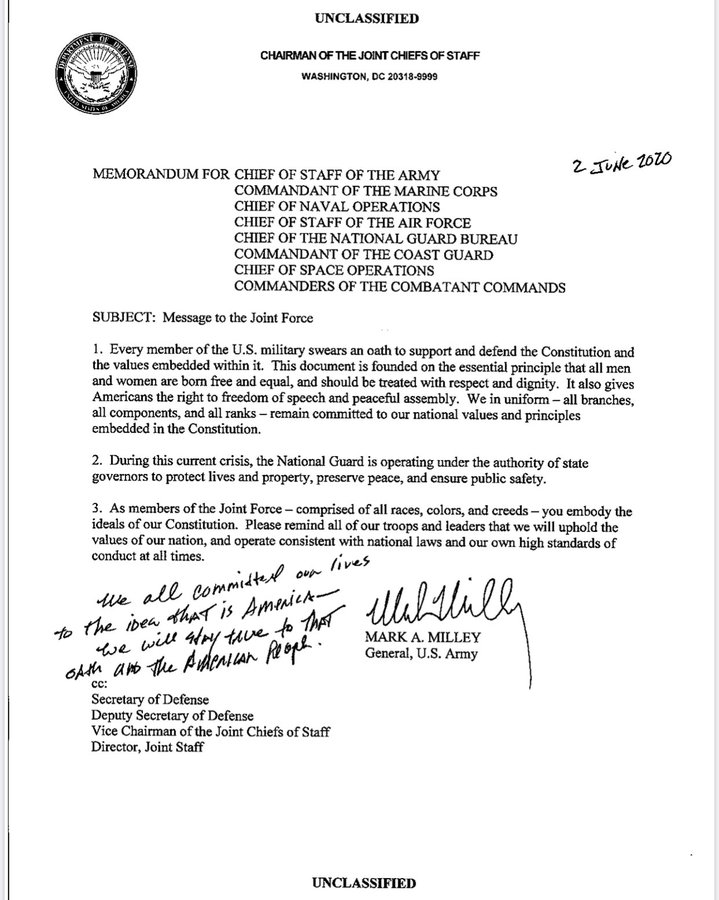 This memo from Gen. Milley is pretty interesting--I'd even say startling.

You're really digging deep if Drew Brees is the best thing you can bitch about. He's no racist, even if he's a bit stiff a/b kneeling during the anthem. Remember, #SCOTUS said it was legal to burn a flag.

Opinion | Trump Is in Big Trouble via @politico

Drew wasn’t talking about the current protest, the riots or really anything besides HIS feelings on kneeling during the National Anthem.He even explained what they were, the basis and that he actually stands with us. Do we have to entirely agree with him, no.