Version Control for Design – Why Is it Worth Having it? 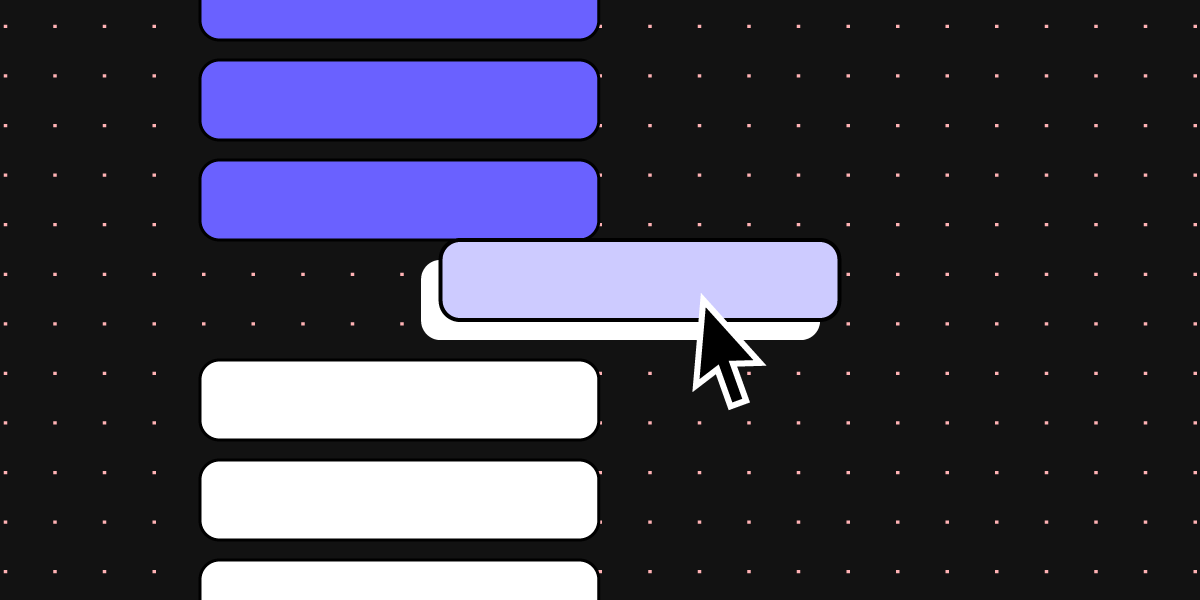 With the rise of design systems, version control has become an essential part of cross-functional collaboration and maintaining a single source of truth across the organization.

UXPin Merge’s Version Control System gives you the flexibility to manage your library version for each design project and effortlessly switch between each version. Sign up for a free trial and discover how UXPin can revolutionize your product design process and enhance cross-functional collaboration.

What is a Version Control?

Version control is a method of maintaining a historical record of each update and release for data sets, software, documentation, and other projects.

The practice dates back to 1962 with IBM’s OS/360 IEBUPDTE software update tool, which many people consider the precursor to version control systems.

Version control is most commonly associated with software development, but we see these systems in many other tools, including spreadsheets and word processors.

For example, Google Sheets’ Version History records changes, including who made them and the date. You can also switch between versions which are especially helpful if you’ve made a mistake and can’t remember what changes you or a collaborator made. 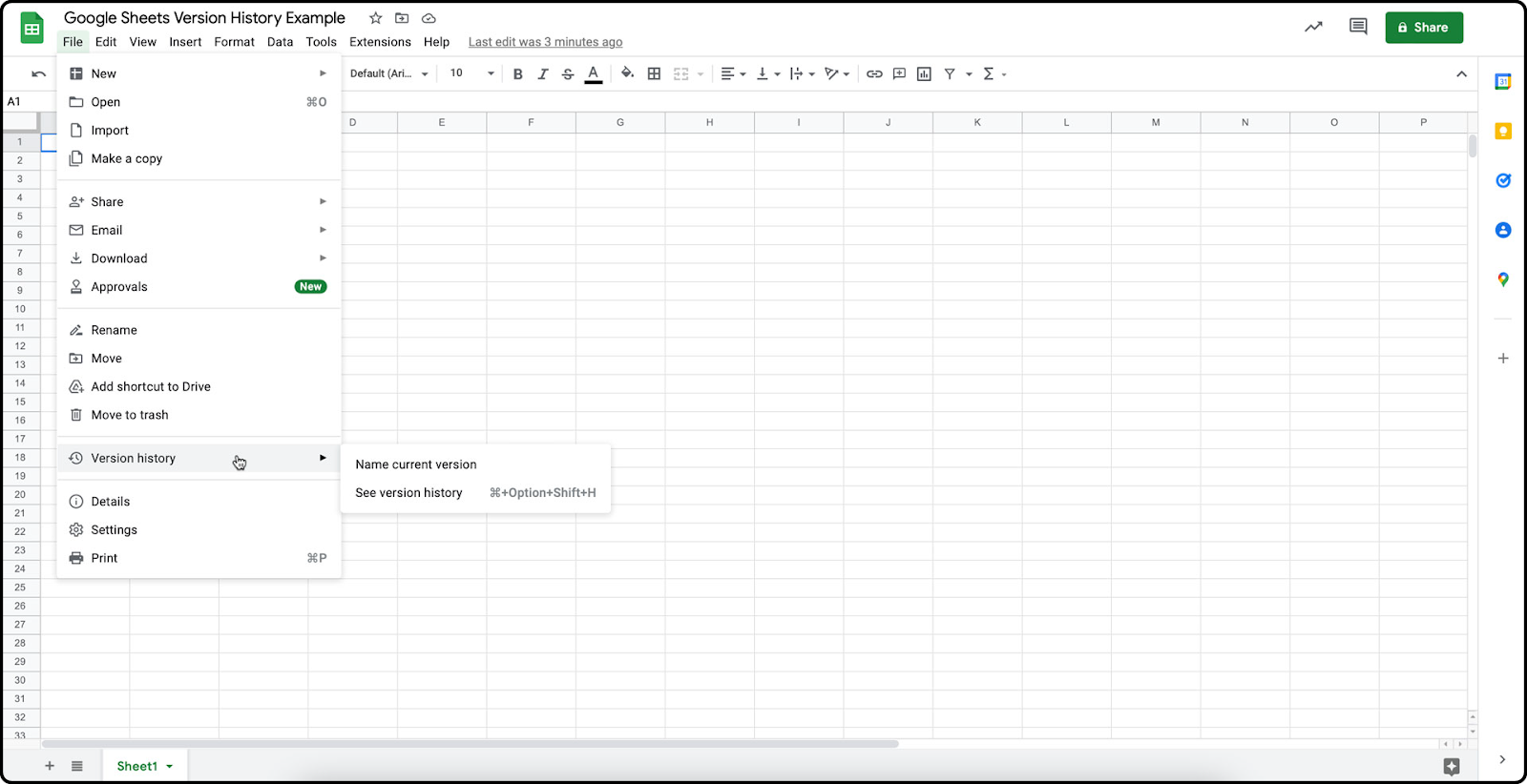 Every Git version records code changes, who made them, and the date. An excellent example of this version history in action is viewing the releases on a GitHub repository like this one from UXPin Merge Tools. 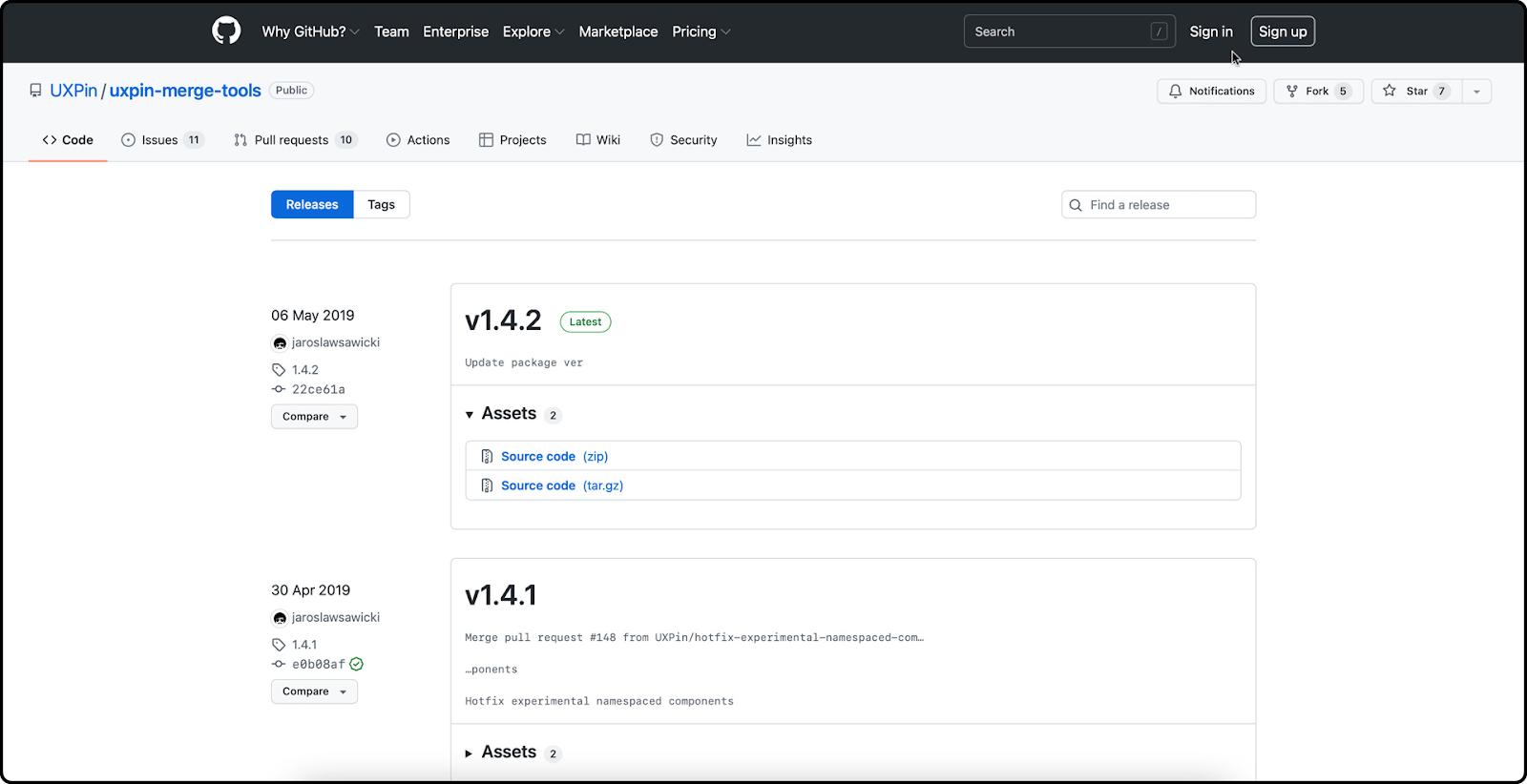 What is Source Code Management?

Source code management (SCM) refers to version control tools like Git, Subversion, CVS, Perforce, and ClearCase. SCM tracks code changes and assists with conflicts when merging branches. If there is an error, you can easily switch to a previous version. You can also use SCM to manage permissions, preventing unauthorized changes.

When working with hundreds or even thousands of engineers tracking updates can be chaotic. Basic version control isn’t enough to facilitate this volume of work. For example, if developers make conflicting changes to a CSS file, SCM identifies these conflicts and prevents overwrites.

Atlassian has an excellent article on SCM if you wish to dive deeper into the topic.

Git Branch: Software has a master or develop branch and multiple “checkout” branches for feature updates and bug fixes. As developers complete checkout branches, they merge with the master to become part of the software.Git Tag: Tags are a snapshot or reference to a commit on a branch. You can have multiple tags on a single branch to reference each release. Dev Community breaks down tags vs. branches in this article.

What are the Three Types of Version Control?

These are the three types of version control and their differences.

Local Version Control System: Every project version is stored locally on an individual’s computer. There is no central repository, so team members must share the entire repository directly rather than syncing to a master repo. Local version control is most effective for solo projects or where teams don’t have to work simultaneously.Centralized Version Control System (CVCS): Uses a centralized server to host the master repository. When engineers commit changes, they update a branch on the centralized repo.Distributed Version Control System (DVCS): Each engineer downloads the entire repository and version history. Whenever they commit changes, they only update their local repository. When engineers complete their work, they push (upload) the entire repository to the centralized master.Centralized and distributed version control systems both have a master repo; they just make commits and updates differently. GeeksforGeeks breaks down this topic with pros and cons here.

What is the Difference Between Version Control and Backup?

Version control includes a master file with multiple versions. A backup is a copy of the master file stored elsewhere. Backups are essential because you don’t lose the entire project if something happens to the master file’s location.

For example, you might have a project stored in a repository like GitHub for everyone to access with backups on your local server and another cloud-based option. If for some reason, GitHub goes down, your team can switch to the backup and continue working.

Traditional local-based UX design tools made it difficult for designers to collaborate the same as engineers. There was no centralized version control for design teams to commit changes.

Cloud-based design tools changed that. Designers can now collaborate on the same project and sync changes to centralized cloud storage, usually hosted or linked directly to the design tool.

UXPin’s Iterations feature is an excellent example of version control within design files. Designers can retrieve, delete, and create iterations of a prototype. While you can’t merge iterations, this feature helps maintain a version history and allows designers to collaborate on the same design file simultaneously.

Version control also helps with onboarding or handoffs to new teams. New team members can view a product’s version history to see how the product has evolved and what the previous team has already tried.

Designers also use version control for design systems by creating different versions for each component library update. Depending on the design tool, these updates will occur either automatically or manually.

If designers use image-based design tools, the design system team will need to maintain two copies of the system, one as a UI kit and the other as a component library.

In a fully integrated design system, designers and engineers sync to the same component library hosted in a repository. Any changes to the repository automatically update for all teams.

UXPin Merge is an excellent example of a fully integrated design system with version control. Merge allows you to sync a component library from a repository to UXPin’s design editor, so designers and engineers use the same design system.

Merge components have the same interactivity and functionality as those hosted in the repo–giving designers the ability to create high-fidelity mockups and prototypes that accurately replicate the final product.

You can sync React components to UXPin directly using Git or other front-end frameworks via our Storybook integration. When the design system team makes changes to the repository, UXPin automatically sends an update to the design editor, notifying design teams of the new version.

This single source of truth allows designers and engineers to collaborate better while facilitating smoother design handoffs with little or no drift.

Branch: Prototypes will only automatically update when there is a change to the branch you’re using. Using the Branch option means you’re always working with the latest design system version.Tag: Prototypes will always reference the tag version unless you switch to Branch or another tag. Using the Tag option gives designers a choice to upgrade versions when they’re ready.Designers can also use the “Latest” checkbox to update prototypes with the newest components automatically. This feature can streamline design workflows because designers don’t have to update prototypes manually.

With UXPin Merge and version control, teams can work independently with less non-productive communication, like “what’s the latest design system?” or “can you send me your design files.” This independence allows companies to scale and iterate quicker–speed-to-market being a crucial competitive advantage.

Tips for Implementing and Improving Version Control for Design

This version control is especially important for monitoring the progress of a design system roadmap and keeping teams informed of the latest releases.

A version control system is only effective with proper design system governance. Governance ensures a design system maintains its integrity with scheduled and controlled version releases.

With proper governance, each version release goes through processes and protocols to ensure new components and patterns meet certain quality and usage requirements.

Creating a release schedule is crucial for managing version control effectively. The design system team can ensure that quality assurance and documentation updates are followed correctly with a strict release schedule.

Many design systems claim to have a single source of truth. But, unless you have a fully integrated design system with designers and engineers using the same component library, your version control requires manual updates for UI kits and design files.

With UXPin Merge, you can scale design without increasing your payroll while enhancing collaboration between design and development. Check out our Version Control documentation to see how Merge can optimize and automate releases for designers and engineers.

Sign up for a free trial to experience UXPin and Merge with an MUI component library via our Storybook integration.